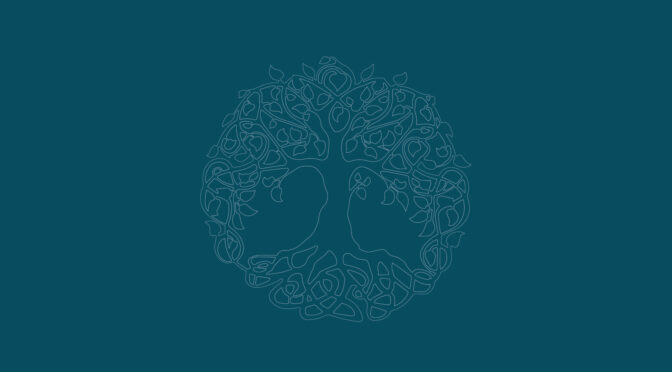 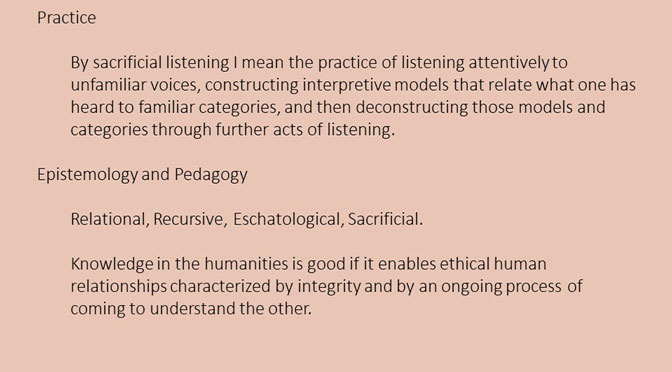 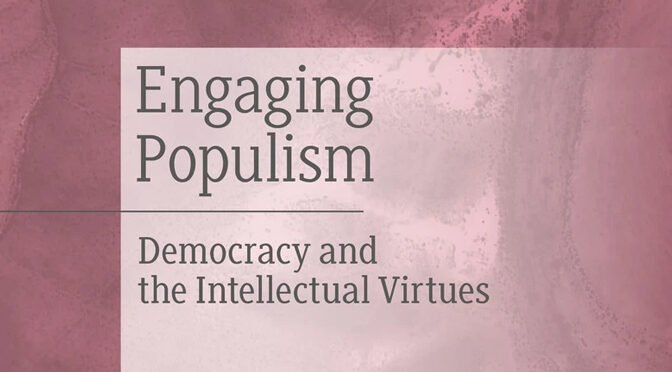 This essay is my first systematic published articulation of my theory of Sacrificial Listening. Many thanks to Mike Berhow and Greg Peterson of South Dakota State University for giving me a chance to sketch out some of my ideas there during a rich conversation in 2016, and for subsequently welcoming this more developed essay into their volume on the importance of intellectual virtues in a polarized society:

This essay stems from two decades of reflection on my scholarship and teaching in the field of Islamic studies. That thinking was first articulated somewhat autobiographically, with a focus on pedagogy, in a paper called “Sacrificial Listening: Christians, Muslims, and the Secular University.” It was fleshed out more systematically in a talk at the University of Oklahoma, “Sacrificial Listening: An Epistemology and Pedagogy for Intellectual Humility in the Humanities.” In this published chapter I attempt to sharpen its philosophical grounding, frame it in terms of intellectual virtues, and broaden its application to include the understanding of Others across political lines.

The published essay and the entire volume are available from Palgrave Macmillan at https://doi.org/10.1007/978-3-031-05785-4. Here I am only able to post my Author’s Original preprint manuscript as a pdf file. 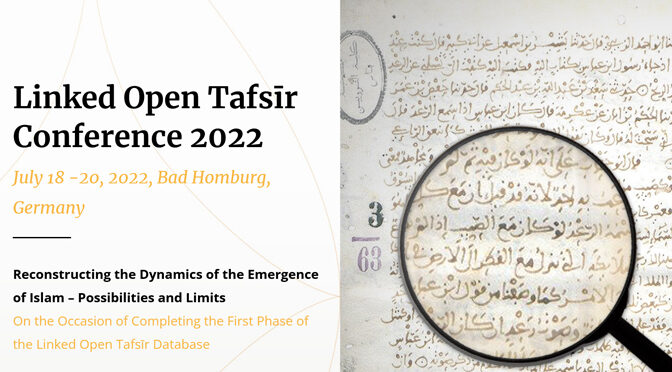 Many thanks to Serdar Kurnaz and his collaborators for inviting me to join the stunning lineup of speakers at the conference celebrating the conclusion of the first phase of their Linked Open Tafsīr project. It was a rich feast, thanks to the wonderful hospitality of our hosts and the full schedule of updates about a wide range of innovative research projects. My paper was:

“Four Contested Steps in the Emergence of a Revealed, Systematic, and Comprehensive Islamic Law.” Linked Open Tafsīr Conference 2022: Reconstructing the Dynamics of the Emergence of Islam — Possibilities and Limits, Bad Homburg, Germany, July 20, 2022.

The slides from my talk are available as a pdf here. 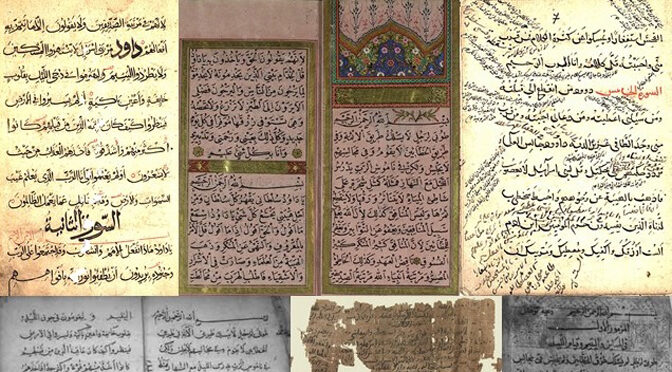 Many thanks to Martin Whittingham and the rest of the team at the Centre for Muslim–Christian Studies in Oxford for welcoming me on June 8, 2022, to present my research on the Islamic Psalms of David, a little-known Arabic text that purports to be the Zabur or Psalms of David but in fact was composed in the 8th or 9th century by a member of the early Muslim ascetic movement. The audience, both in person and online, offered a wide range of thought-provoking questions and insights–many of a historical nature, and some about the significance of these Islamic psalms for Muslim-Christian relations today. We concluded that this early Islamic text reflects a bygone era when Muslim and Christian identities were not yet as solidified in opposition to each other as they eventually came to be.

Here is a pdf of the slides from my presentation. Video and audio recordings of the presentation are available here through the CMCS website.

“A Muslim Rewriting of the Psalms of David.” Centre for Muslim–Christian Studies, Oxford, June 8, 2022.

Abstract:
Some Arabic manuscripts of the “Psalms of David” contain not the Biblical Psalms but Muslim compositions that sound more like the Qur’an: not human praises and prayers to God, but God’s admonitions to the prophet David, urging him to flee the pleasures of this world, spend his nights in repentant prayer, and prepare for the Day of Judgment. There are echoes of the Biblical Psalms and Gospels, but the ethos is markedly different: rather than the Psalmist’s plaintive laments or grandiose descriptions of creation, one hears God thundering his own majesty and warning of the fires of hell. This alternative scripture exists in at least ten different versions, all stemming from a single eighth- or ninth-century collection of one hundred psalms composed by a member of an early Muslim ascetic movement that was inspired in part by Christian monasticism. Only a small fragment of that text has been preserved in its original form, but the entire text was edited, rewritten, rearranged, and expanded by several later editors who modified it to fit their own views. For example, the original text referred without blushing to the Biblical story of David’s adultery with Bathsheba and murder of Uriah, but most later editors omitted or minimized David’s sin out of respect for his status as a prophet. Over the centuries Muslims have treasured and recopied these psalms for several reasons, including their predictions of Muhammad and their occasional polemics against Christians, but they were intended mainly as a critique of worldly Muslims. In their original form they reflect a time when Muslims and Christians had contrasting notions of scripture but held overlapping views about religious piety, which they expressed using a shared vocabulary of stories and ideas: the figure of David, his Psalms and his sins, virtue and repentance, asceticism and spirituality, heaven and hell, and a rich common stock of maxims and metaphors. 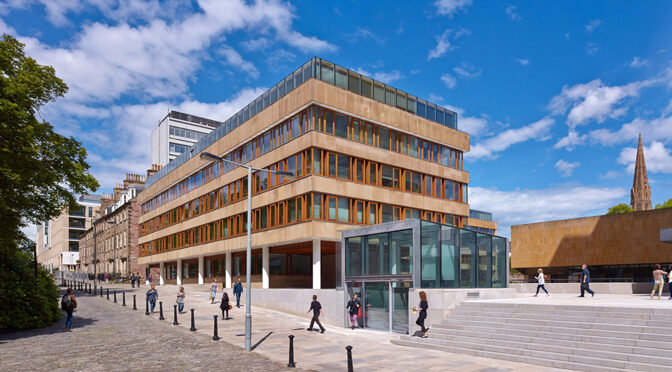 It was good to be back at the first British Association for Islamic Studies conference to be held in person since 2019. My paper this year was: 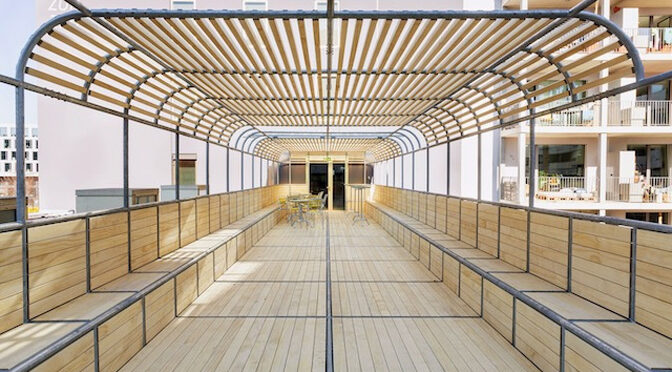 Many thanks to Amir Dziri and Hansjörg Schmid, both of the Swiss Center for Islam and Society at the University of Fribourg, for inviting me to join an exciting, coherent, and flawlessly organized conference celebrating the dissertations of seven graduates of their doctoral program in “Islam and Society: Islamic-theological Studies.” My presentation responded to an innovative and sophisticated dissertation by Esma Isis-Arnautović (“Vom Menschenbild zum Paradigma: Zur Begründbarkeit einer theologischen Anthropologie im Islam”):

“The Anthropological Turn in Islamic Theologies of Revelation.” On the Future of a Young Discipline: Islamic-theological Studies between Systematic and Practical Research, Swiss Center for Islam and Society, University of Fribourg / Paulus Akademie, Zurich, May 31, 2022.