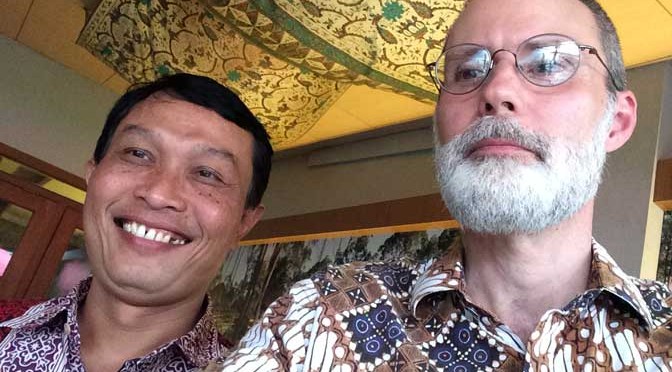 This Arabic article on the legal hermeneutics of al‑Shāfiʿī was presented at a regional meeting of the Nahdlatul Ulama in Yogyakarta, Indonesia in 2013, and then published in a journal edited by my host Dr. Sahiron Syamsuddin (with me in the picture above):

Here is a pdf of the article (marked up to indicate a few corrections necessitated by formatting issues).

Here is the English abstract:

Hermeneutics is not a new discipline among Muslim thinkers; it goes back to al‑Shāfiʿī’s founding of the discipline of legal theory (uṣūl al‑fiqh). This article examines the role al‑Shāfiʿī played in the founding of Islamic legal hermeneutics, and then describes his hermeneutic as one of great flexibility for defining hermeneutical intertextual relationships, and great freedom for deriving legal rules from texts. Then it presents the goal of al‑Shāfiʿī’s hermeneutic as the establishment of a perfect correlation between his legal opinions and the Qurʾānic verses and Prophetic traditions that were widely accepted in his time. Then it indicates the most important consequence of al‑Shāfiʿī’s legal hermeneutic: the possibility of imagining a legal system that is at once divine and human, that is entirely based on the texts of divine revelation yet also evolves to suit the needs of human society across time and space.