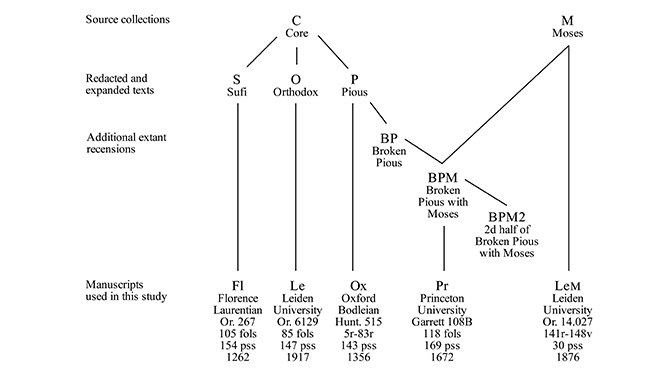 This article maps out the relationships between several very different versions of the Islamic Psalms–a set of pious psalms composed by Muslims in the style of the Qur’an and presented as the Zabur revealed to the Prophet David. It is based on papers presented at the Sixth Woodbrooke-Mingana Symposium on Arab Christianity and Islam in 2009 and at the American Oriental Society in 2010. My map of the various recensions and the families of manuscripts that represent them continues to evolve, and I have updated it slightly in oral presentations such as “An Early Recension of the Islamic Psalms of David,” but this article remains, as of 2017, the most complete published discussion of the different versions.

For those without access to the journal, here is a pdf of the pre-press Accepted Manuscript.

Numerous Arabic manuscripts of the ‘Psalms of David’ contain not the biblical Psalms but Muslim compositions in the form of exhortations addressed by God to David. A survey of five manuscripts reveals that all such texts studied to date can be traced to two early source collections, whose contents were rewritten and expanded by three medieval authors and numerous copyists to produce four distinct texts in seven different recensions. These texts intersect with several types of literature: rewritten Bible, interreligious polemic, sermons, wisdom literature, divine sayings, law, Tales of the Prophets, and ‘dialogues with God’ (munājāt). They should be regarded not as polemical rewritings of the Bible, but as rewritten Qur’an, in which each author employs the idea of David and his Psalms to lend the authority of revelation to his own message.