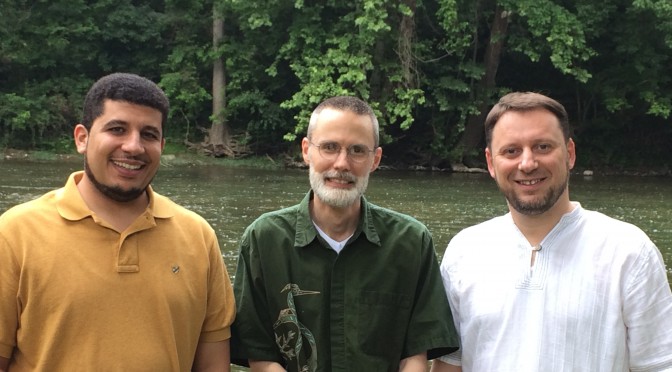 In June 2014 I had the pleasure and privilege of participating in a Summer Institute for Scholars on “Sharia and Ethics” at the International Institute for Islamic Thought in Herndon, Virginia. The lively intellectual exchange was outdone only by the warmth and hospitality of the staff and participants, including Samy Ayoub and Ermin Sinanović, picture with me here at the closing picnic at the home of Yaqub Mirza. (Thanks to Sarra Tlili for the picture!)

My presentation, “The Ethical Structure of Imām al-Ḥaramayn al-Juwaynī’s uṣūl al-fiqh,” attempted to tease out some of the assumptions about the nature of ethics that are implicit in one short classical legal theory text, Kitāb al-Waraqāt fī uṣūl al-fiqh. It was subsequently published in an Open Access volume on Islamic Law and Ethics. It reframes and expands upon some ideas from my Critical Introduction to Islamic Legal Theory.

This event was a rare opportunity for me to participate not only in historical study of Islamic thought but also, as an outsider, in constructive Muslim discourse about the present and future of Islamic law and ethics. Being included in this conversation was a privilege, and perhaps also an indication that my historical studies have achieved some degree of sacrificial listening.